Meet the Team of Dog Trainers 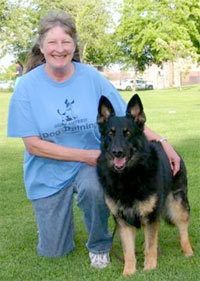 Janet started the dog training business, Guaranteed Dog Training, in April of 1975 in Fresno Ca. then moved the business to Stockton in 1980. When she moved to Stockton, her mother, Marion MacDannald, learned how to train and assist with the classes and then later teach classes.

This business has several avenues of services:

Janet and Marion have shown dogs in obedience and have won many first place ribbons and trophies. Janet has received titles such as ‘DOG WORLD AWARD', ‘HIGHEST SCORING DOG IN NORTHERN CALIFORNIA' and ‘SEVENTH HIGHEST SCORING DOBERMAN IN THE NATION'.

Janet and Marion have been to many seminars with top dog trainers from all over the country and have learned all the new methods; the ones that are good were incorporated into the classes.

Marion has passed away March of 2010. She will be deeply missed by all. CLICK TO SEE MORE

Janet and Marion both say,

“We are so very LUCKY to get to do what we really LOVE, Working with the dogs.”

Janet has been mentoring capable people to help with dog class though-out the years, teaching them the special methods to teach at dog class and how to solve difficult dog problems. Now after years of training, she has put together a great ‘Dog Training Team’ for you.

MEET THE TEAM THAT JANET HAS TRAINED FOR YOU

Kathy started training her young 8 month old female German Shepherd, Mandee in the early Spring of 2006. Kathy was very good with the training and went on to repeat classes then to the Advanced Classes and the Agility Classes. Kathy and Mandee graduated at 1st place in the Advanced Classes.

Now all 3 dogs have been through the Advance Classes the Agility Classes and are also Therapy Dog. Mandee and Marshal have become a Read Dog with the Paws to Read Program.

Kathy and Mandee have now earned an AKC, CD (Companion Dog) Title. They have also started training for CDX (Companion Dog Excellent), which is the next level of competitive obedience.

All three German Shepherds have their RN (Rally Novice) and RA (Rally Advanced) Titles. They expect to complete the RE (Rally Excellent) Title soon. All three dogs have also qualified as a Canine Good Citizen.

It is a familiar sight to see Barry with all three German Shepherds for the socialization and the obedience at the dog class.

Kathy was raised on a small farm in Kansas. They had cows, chickens, dogs, cat and rabbits. She had her own pony she trained herself.

In the late 80’s Kathy and Barry move to our area. Now they are living on a couple of acres of land where they have plenty of room for all the animals to run.

Working with animal comes very natural for Kathy because of her live experiences. We are very fortunate to have Kathy to help with the training classes.

Robin has had many dog companions in her life from her first dog (as an infant) a Boston Terrier named Robin’s Tiger to her current adorable toy poodle named Jasmine. “My Mom probably still cringes when she thinks of all the strays that “just followed me home” sometimes with encouragement” Robin says.

After a few years without a dog, due to apartment living, Robin got Jasmine as a puppy in 2006. Jasmine was supposed to her daughter’s dog, but the busy life of a high school senior and the needs of a new puppy just didn’t match up. Jasmine formed a bond with Robin and they started training together with Guaranteed Dog Training that summer.

Following the philosophy that even a small dog should be trained, socialized and well-mannered, Robin has taken Jasmine through Guaranteed Dog Training’s Beginner Class, and has also participated in Advanced Obedience and Agility classes for several years.

As a team, Robin and Jasmine have moved on to competitive obedience and have earned an AKC, CD (Companion Dog) Title as well as the RN (Rally Novice) and RA (Rally Advanced) Titles. They expect to complete the RE (Rally Excellent) Title soon and have also begun training for CDX (Companion Dog Excellent), which is the next level of competitive obedience. Jasmine has also qualified as a Canine Good Citizen.

Robin has been helping with the dog training classes for a few years now and it’s a great benefit to the classes that she is sharing her knowledge and experiences. Robin believes that training together is a great way to strengthen communication with your dog. It leads to deeper bonding and understanding for both the dog and the handler and it really is just a lot of fun.

For as long as Kari can remember, dogs have been a part of her life. Having a Dad who bred and raised dogs during my entire childhood helped me become a responsible pet owner.Her main K-9 experiences have been with Labrador Retrievers and Weimaraners.

Her daughter brought home, (against her will have you), this crazy, energetic, amazingly smart and stubborn Australian Shepherd/Chocolate Lab mix. She had no clue what to do with him. The first 6 months were extremely difficult and she was ready to give up until I was given a gift certificate for Guaranteed Dog Training. "Guaranteed Dog Training helped me get Brody under control. Thru the training I developed a healthy and loving relationship with my dog."

Who knew that yet another bear of a dog would enter her household two years later. Takoda, Koda for short, is a Pit-bull/Lab mix that she somehow ended up acquiring. This boy was just as energetic, crazy, stubborn, and lovable as Brody, yet still desperately needed some help from Janet. She decided to sign him up for classes too and ever since then, her relationship with "the boys" has flourished.

"I am extremely happy and thankful for Guaranteed Dog Training. The training has worked wonders for me and my sanity regarding my dogs."

"I am also very thankful for the opportunity Janet has given me by taking me on as an apprentice dog trainer. I absolutely love helping out and learning everything I can about training and shaping doggy behavior."

Ron has had an attraction to man’s best friend since he was a small boy. When he was 11 years old his parents brought home their first family dog ‘Bandit’. Bandit was a 6 month old Saint Bernard that just loved to play. Ron remembers rushing home from school just so he could see Bandit, Ron would walk Bandit around the back yard for what seemed like hours to him at the time and did his best to teach Bandit sit and stay commands.

Since 2006, he has gotten his ‘Doggie fix’ by volunteering at local animal shelters learning about specific breeds and behaviors of those breeds but more importantly learning about the cycle of unwanted pets finding their way to the shelter. The first couple of years he volunteered feeding, cleaning kennels and walking the dogs for daily exercise. The next few years he spent working with ‘rescue dogs’, dogs that wound up at the shelter and were deemed unadoptable for any number of reasons. Ron learned a sad truth, these ‘rescue dogs’ have been neglected by their owners and never given the opportunity to learn how to be man’s best

friend. While working with these rescue dogs it became clear to Ron that the times he loved spending with Bandit as a young boy could help these unfortunate dogs who wound up at the shelter. His thinking is, if only these dogs had the opportunity to receive just basic obedience training maybe they would stand a better chance at finding their forever home.

Realizing this, Ron started working with the shelter on a training program to teach the shelter dogs just some very minimal obedience training using what he had learned from reading books and talking with ‘official’ dog trainers. Working with shelter dogs Ron realized that with just minimal basic training the dogs were finding homes quicker. For him, it’s the best feeling in world to see a dog leaving the shelter with his new forever family. The worst feeling for Ron is when a dog has returned to the shelter because his/her new family couldn’t handle the dog.

Ron’s on a mission to minimize the number of these shelter returns. He has discovered that most adopters who return their dog, return them because they do not have an understanding of how to communicate with their dogs or can’t afford the basic obedience training classes that give these dogs a chance to shine. In addition to continuing his apprenticeship course with Guaranteed Dog Training, Ron is currently working with shelter officials to start free basic obedience training classes for adopters who have given these dogs a second chance at a family life he feels they truly deserve.

“I give a very special Thank You! - to Janet Bates, and the knowledgeable trainers at Guaranteed Dog Training for their support and guidance in helping me gain the knowledge to achieve my mission to save the shelter dogs”.~ Ron

Marie started bringing her doggies to class in 2002. She was looking for a place to socialize and train her dogs after moving from the Bay Area. It didn't take long to find out that Marie was quite knowledgeable about dog training. She has many titles on many dogs.

Marie started showing dogs in 1976. Her first dog was a Labrador Retriever mixed with German Shepherd. Through the Training Club she belonged to, she titled her dog in obedience. She got a CD, CDX, and a UD. (CD is Companion Dog, CDX is Companion Dog Excellent, UD is Utility Dog). In the eary 80's, Marie was involved in starting the ‘Mixed breed Club of America'. She got a CD and CDX title with her dog through them too. She practiced Tracking with her dog for 3 seasons.

Marie trained a Black and Tan Coonhound and an Irish Setter in the early 80's. She got a CD on both dogs through AKC (American Kennel Club).

Marie got her first Lowchen (Rare Breed) in 1986. She showed him in the mid 80's, his 2 daughters in the early 90's and several others since then. She has received many titles on those dogs throughout the years. Through the ‘Lowchen Club of America ' and got many CH (Champion) in Conformation and CD and CDX titles. She got a few Mexican, Canadian and International CH titles. She got CH titles from the ‘Rare Breed of America' and the'States Kennel Club'.

In 1999 the Lowchen was finally recognized by the AKC. Marie then got CH, CD, CDX titles with the AKC. She also showed in Agility.

Marie has a ‘Record of Merit' through the ‘Lowchen Club of America ' for having 10 or more CH. Also 9 of her dogs passed the ‘Temperament Test' and more than 10 have a ‘Canine Good Citizen Award'.

Marie owned and ran a Pet Store for 12 years in the Bay Area and sold it in 1995. The last 10 years of owning the pet store, she also did grooming.

Marie says “ I really like the last class because I like to watch the handlers interact with their dogs, now that they can really communicate”.

We are very happy to have Marie as part of the team with all those years of experience.